Bitcoin is currently attempting to start another leg higher, with buyers now pushing it up against the resistance it faces around $9,600.

The cryptocurrency’s latest move higher has come about after an extended period of trading over $9,500. This was the first time in weeks that BTC was able to post sustained gains following an upwards movement.

Analysts are noting that it is quickly navigating up towards a heavy supply zone. This price region may prove to be insurmountable unless there is some catalyst for further upside.

One potential impetus for further gains could be the accumulation pattern BTC has formed over the past several weeks.

Despite being an overtly bullish formation, one trader believes a movement towards $7,000 is still in the cards.

At the time of writing, Bitcoin is trading up marginally at its current price of $9,600.

This marks a slight climb from $9,500 – which is the price at which it has been trading throughout the past couple of days.

The cryptocurrency’s current strength could start faltering in the near-term, however, as BTC is about to visit a massive supply zone.

One analyst spoke about this region, noting that he expects BTC to rally as high as $9,800 before it faces insurmountable selling pressure that leads it down to $9,400.

“I think we get one more leg up here before any significant pullback. If/when we do pullback, there are two areas of interest I am watching. The one in the 9200’s is the ‘backup’ in case the main level in the 9400’s fails,” he explained.

Move to $7k in the Cards Despite Bullish Accumulation Pattern

Another analyst recently explained that he believes Bitcoin’s recent consolidation phase has been accumulation, rather than distribution.

This may be a positive sign for its near-term price action, but he also warns that a dip to $7,000 is still in the cards if it faces further consolidation.

“Continue to believe in bullish accumulation… Timing ripe (new cycle) for significant move higher here. Cannot rule out another 40-day consolidation though, which ends with sharp V pattern from $7k’s or a volatility surge.” 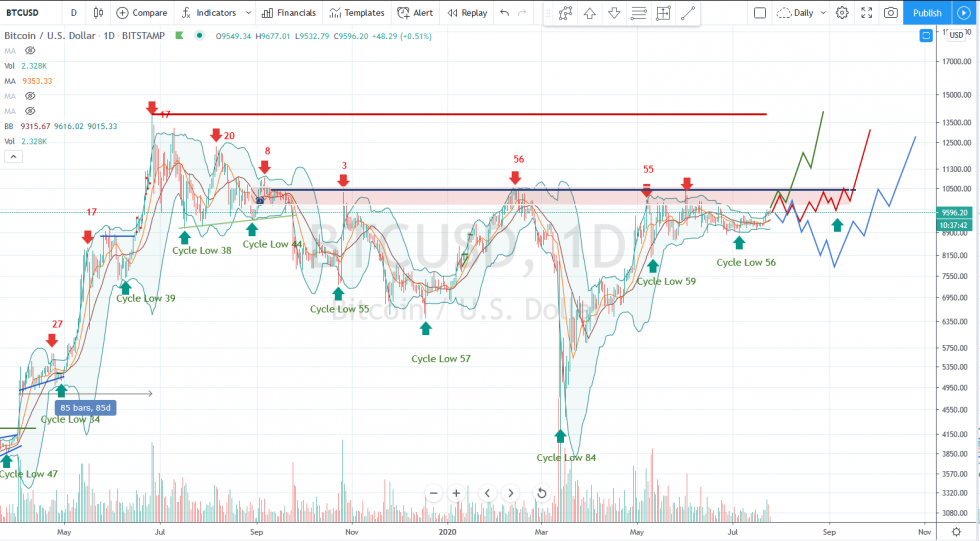 How Bitcoin trends in the coming days should provide insight into whether or not it is in for further downside.