Bitcoin May be Topping Out After Buyers Lost a Key Level

Bitcoin has entered what appears to be another bout of sideways trading within the upper-$8,000 region. This has come about after the crypto’s bulls made another attempt to propel it past the resistance that has been established throughout the lower-to-mid $9,000 region.

The benchmark crypto’s recent price action has led analysts to note that it could be topping out, as the consecutive rejections it has posted throughout the past few days is a dire sign that greatly favors sellers.

If the crypto confirms this possibility and begins declining lower, its first major support zone exists around $8,250.

At the time of writing, Bitcoin is trading up marginally at its current price of $8,935, marking a notable decline from daily highs of $9,200 that were set yesterday afternoon.

The crypto was able to post what appeared to be a sustained break above $9,000 yesterday afternoon, as buyers held BTC above this level for several hours before moving to test the resistance at $9,200.

The visit to this level, however, sparked a sharp selloff that led it down to its strong support at $8,800, which has since been defended.

One popular crypto trader spoke about this latest rejection in a recent tweet, explaining that it is now imperative that buyers continue defending the crypto’s point-of-control at $8,800.

“BTC update: Hit our target of 9.2; anticipating a retrace to 9K from here, followed by bullish continuation to the highs near 9.4K. If we begin losing 9K support and closing back within, i’d look to the POC (Point-of-Control) around 8.8 for support,” he said while pointing to the below chart.

Another popular pseudonymous trader recently explained that he believes BTC could be forming a local top as it fails to surmount its overhead resistance.

“HTF view remaining the same; significant resistance area I’m expecting to potentially top out. Downwards many tests to go, with $8,250-8,400 as the main first one. Zoomed in; Could see one more tap towards $9,200 before corrective. $9,000 is crucial to hold,” he said. 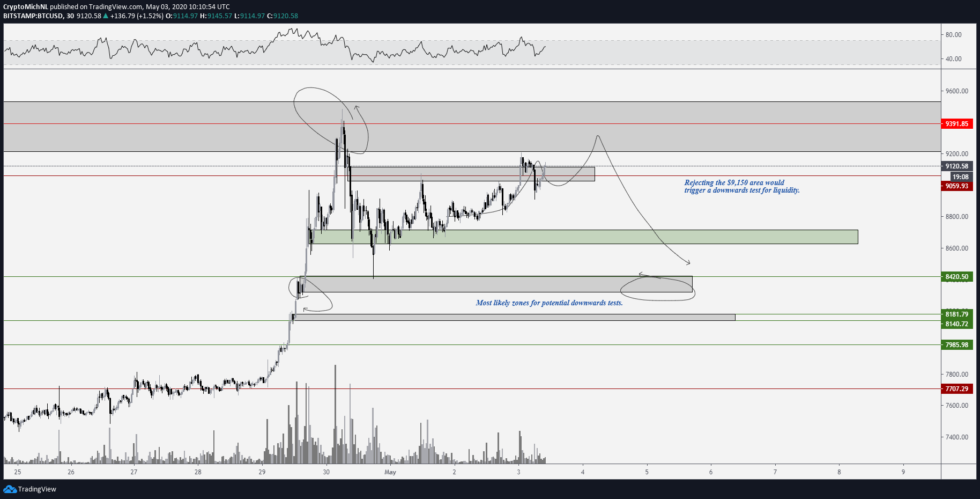 Because Bitcoin has broken below $9,000 in the time since this analysis was offered, it is a growing possibility that the crypto declines lower in the hours and days ahead.

Bitcoin (BTC) towards Gold like Adoption Halving and Tether Transactions